Don Schliff, renowned Port collector and one of the founders of Wine Warehouse, the famous wholesalers headquartered in Los Angeles, organized another historic Port tasting in February 2020, featuring Decades of Port 1834 to 2017. The wines for this spectacular tasting came directly from Don Schliff’s underground refrigerated cellar. Most of the wines were acquired from England over the last 40+ years and the bottles have lain undisturbed since then. The provenance was perfect!

The Ports are English bottled except for the 1958 Ferreira, 1955 MacKenzie, 1927 Niepoort, and 1945 Taylor, which were Oporto bottled. All fill levels were base of the neck or better. Most of the Ports were opened by Don with Port tongs just before the tasting.

The high alcohol, elevated sugar levels, convex neck, and gradual deterioration of corks in vintage Port make their removal challenging when using a traditional corkscrew. Long ago aficionados dispensed with cork removal and decided to open the bottle by breaking its neck below the level of the cork. However, unlike the showy French who snap off the tops of large Champagne bottles with sabers, the Portuguese came up with the idea of applying a circumferential, red hot iron to the bottleneck to heat it to several hundred degrees and then quickly applying a cloth soaked in ice water. The abrupt temperature change produces an encircling fissure in the glass that allows the neck to be easily snapped off.

The Genesis of the Port Tasting

The dress was formal attire in honor of Ardison Phillips, who along with Don, Roy Brady, and Andrew Quady, set the standard for Vintage Port Tasting Luncheons held at Ardison’s Studio Grill in Hollywood.  In 1985 Ardison and Don organized a black-tie vertical tasting of Taylor Vintage Port from 1908 to 1980.  In 1987 they did a vertical of Graham’s from 1927 to 1983.  In 1988 it was Fonseca from 1927 to 1985.  Some of the illustrious people who attended included Roy Brady, Andrew Quady, Bruce Guimaraens, Manny Klausner, Fred Brander, and Dave Williams.   A tradition was started for an annual black-tie Port luncheon between Christmas and New Year’s that continued until Ardison closed the restaurant.

Conceiving and executing a multi-course meal for a Port tasting is almost as difficult as doing one for Sauternes.  Both share the quality of extreme sweetness, but one is made from botrytized raisined white grapes, while the other is a sweet red wine whose alcohol level is supplemented with brandy to the 18-20% range.  So Port, in addition to sweetness, has the heat of alcohol for the cook to contend with.

The classical accompaniment for Port is Stilton cheese and freshly cracked walnuts.  Some cultures like spiced savories with the wine.  Our editor, John Tilson, likes popcorn.  The common feature of all three groupings is salt and umami.

Cockburn
Founded in 1815 in Oporto by Robert Cockburn, in 1854 two brothers joined the firm, which was renamed to Cockburn & Smithes.  In 1863 the Cobb family joined the company, with all three families playing key roles in the firm’s development.  There were various changes in ownership, Harveys in 1962 by Allied-Lyons, later Allied-Domecq.  In 2005 Pernod Ricard assumed control, selling the Port House to Beam Inc.  In 2006 the Symington family took over all the vineyards and lodges and the brand name in 2010.

Ferreira
Founded in 1751 by A.A. Ferreira, a family of winegrowers in the Douro Valley, it was the first Port Wine company.  Manuel Ferreira was followed by his grandchildren, then by Dona Antonia Ferreira, the grande dame of the Douro in the latter half of the 19th century, important in Douro viticulture and in creating new production facilities, the building of roads, construction of hospitals and schools.  In 1988 Sogrape , who pioneered the vinha ao alto or vertical system of planting, acquired the firm.

Fonseca
In the 1700s the Brazilian Fonseca family was operating in Oporto but the present firm was not formally founded until 1822 when the Guimaraens family acquired control through the purchase of the Fonseca holdings.  In 1862 it was named the House of Guimaraens.  In 1948, ownership of Fonseca Guimaraens was consolidated with Taylor, Fladgate & Yeatman.  The firm is noted for its consistency of style through the years.

Graham’s
Founded in 1820 by a textile firm of W & J Graham, with its roots in Glasgow, Scotland, eventually its reputation grew as shippers of fine Port.  In 1882, the Symington Family joined the firm and gained complete control in 1970.  Their property Quinta dos Malvedos is one of the most famous vineyards in the Douro.

Mackenzie’s
Founded in 1852 by Kenneth Mackenzie, a Sherry shipper from Cadiz, it joined with Driscoll & Co. in 1870.  The Port production of the Sherry house started during the 19th century but after WWII, the house was sold to J.H. Andresen.  In 1970 Andersen sold Mackenzie to Harvey in Bristol.  Their last known Port was the 1982 vintage.

Niepoort
Founded in 1842 by Eduard Kebe, the small Dutch company added F.M. van de Niepoort as a  partner in 1847.  In 1858, Niepoort became sole owner, managed for 20 years by Dirk Niepoort, the fifth generation in the family.

Sandeman
Established in 1790 in London by George Sandeman, the firm was family-owned until 1979 when it was acquired by Seagram.  Sogrape bought the firm in 2002.

Warre’s
Established in 1670, it is the oldest Port house and has continued to be a major force since then.  It is the first and oldest British firm in Portugal and a pioneer in the Port trade.  Originally known as Burgoyne & Jackson, in 1729 the first member of the Warre family arrived in Oporto.  In 1905 the Symington family joined the firm which had been family-controlled and run by the Warres for over three centuries.  Symington became sole owner in 1908 and the company is now run by the 4th generation of the family.

1834 Shipper Unknown
Dark amber color, faint aroma of dried fruit and spice, with similar delicate flavors, hinting of sweet cherries and peppery spice.  It is surprisingly good, still alive and fresh, good balance, with a light body, and a lingering finish.  Very nice, especially given its age. Very Good Plus. 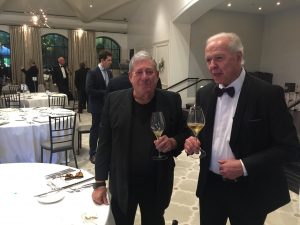 1927 Niepoort Vintage Port (Oporto Bottled)
Dark red color, lovely, faintly tropical aromas and flavors of sweet fruit, caramel, cherry, plum and maple. It has good body, richness, complexity and intensity with delicious fruit, extending through the long finish. Evolving slowly, it is not yet at a peak. Outstanding Plus.

1963 Fonseca Vintage Port
Light ruby amber color, it has a nose of delicate, dried fruit, spice, and nuts. Similar flavors are clean, with caramel, licorice, delicate berries and some tannin. It is a soft, complex, elegant wine, with a lingering finish of sweet, spicy fruit and a noticeable alcoholic note. Very Good Plus.

1994 Taylor Fladgate Vintage Port
Dark ruby color, subtle aroma of dried and fresh fruit. On the palate are berries, cherries, spice, caramel, nuts, herbs and soft tannins. It is fresh, balanced, elegant and complex. Give it time, should really enhance in quality. Outstanding to Outstanding Plus.

2000 Quinta do Noval Vintage Port
Dark ruby color, with an elusive nose.  A palate of sweet berries and cherries, flowers, mineral and caramel is still a bit reserved.  It is complex, spicy, fresh, harmonious and balanced, with big tannins and a very long finish. Give it time. Very Good Plus.

2000 Quinta do Noval Nacional Vintage Port
Deep ruby color, a big wine with concentrated black cherry fruit in nose and mouth, it is still a bit reserved. It is complex, spicy, fresh, harmonious, balanced and intense, with firm tannins, and a very long finish.  It needs a lot of time, should be amazing.  Extraordinary.

1987 Niepoort Garrafeira
(Garrafeira, private cellar or reserve, is a Port from a single year aged for a short time in wood, followed by a longer period spent in glass demijohns, decanted of its sediment and then rebottled in conventional bottles.)
Medium ruby with amber rim, it opens with a tawny character on the nose. The palate is similar, becoming smooth, soft, spicy and warm, with a mature character, a note of alcohol and some tannin.  The lingering finish hints of medicinal cherry.  Outstanding.

Mystery Port
1863 Niepoort Garrafeira Vintage Port
Daniel Niepoort, sixth generation of the Niepoort family, said the wine was set aside by the founding father of the firm as a tawny then transferred to glass demi-johns around the turn of the 20th century.  Medium color with a light greenish tint, it has a rich nose of coffee, nuts and sweet fruit that carries over to the palate.  It is intense, sweet, round and concentrated, with some acidity, resembling old Madeira, offering fresh scents, tastes and finish.  Extraordinary.

Don Schliff’s Vintage Port tasting was an exceptional event, proof once again that Vintage Port is one of the greatest wines produced in the world.